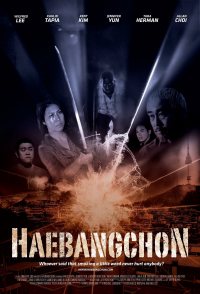 Haebangchon is a crime drama with an ensemble cast set a midst a mafia takeover of the small foreigner town. It features multiple characters on both sides of the conflict who are faced with their own personal needs for freedom that culminates into the larger story (similar to the movies 'Crash' and 'Go'). One of the subplots include the Mafia's extortion of a foreigner named Q (Kahlid Tapia) who is forced to sell a large amount of marijuana in order to leave with his life, the problem is, he's not a very good drug dealer and he loses the weed. Another one hinges on the mafia's slavery of one of its henchmen Ji (Jennifer Yun). Ji pledged her life to the mafia in exchange for her fathers, she wants nothing more than to pay off her debt and return to being a full time mother. Mr. Yu, the clan leader, wants to take Haebangchon as a new means of income for his family before he retires.