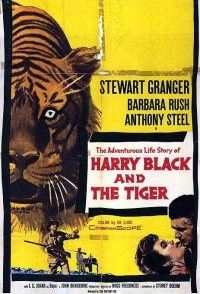 Former British Army Major Harry Black comes to the rescue of an Indian village terrorized by a ferocious Bengal tiger.During the hunt, Major Black comes across his former wife Chris who is now remarried.Her new husband, Desmond Tanner, already knew Major Black from a German prisoner-of-war camp in World War Two where his cowardice during an attempted escape, cost Black his leg.Tanner now manages a tea plantation and wants to accompany Harry Black on the hunt in order to impress his young son, Michael. Harry Black still loves his ex-wife Chris and Desmond Tanner senses this.Although none of the two men openly admit it they compete against each other for Chris' love. During the hunt, Tanner again shows himself a coward.