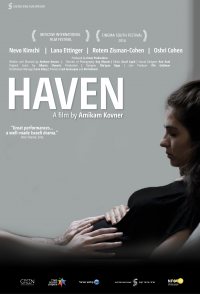 During the Second Lebanon War, Motti and Keren, a young orthodox couple from the North of Israel, looks for a place to stay to escape the bombings and stress of their hometown near the border. They end up at the heart of suburbia, in Tel Aviv, at the bourgeois apartment Yali and Boaz. The spacious apartment suddenly seems crowded and small when tensions between the couples begin to mount. The situation is further complicated as Keren's obvious pregnancy adds to the pain of Boaz and Yali, who cannot have children of their own. The shifting relationships between the four serve to examine the tensions and complexities of Israeli society today.