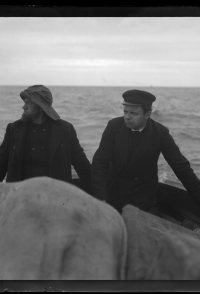 Robert Green, son of a poor fisherman living on the banks of the Southampton waters, and Eleanor, the ship owner's daughter, are desperately in love with each other. The ship owner, discovering the real state of affairs, and desiring to part the lovers for reasons of his own, persuades Robert to sign for a six months' cruise aboard his vessel, the "Venus." After the ship has been out for several weeks, it is reported lost with all hands on board. The ship owner is pressed by Mr. Johnstone, his principal creditor, for a bill for $10,000, which Johnstone offers to cancel if Eleanor will marry his son. Eleanor is coerced into this alliance, and she, believing Robert dead, and anxious to save her father from ruin, accepts the proposal. Meanwhile, Benjamin, the only survivor on board the "Venus," is discovered in a dying condition by smugglers, who ransacked the vessel for plunder, and he is taken to their cave in a desolate island, resuscitated and made one of them against his will. One ...