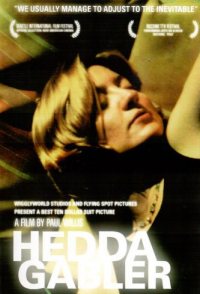 Adaptation of the Henrik Ibsen play transposes the action into a contemporary setting in which the newly-married, quick-witted and energetic Hedda and her bland but stable husband George have recently arrived in their brand new home. Boxes are piled everywhere, but the sun is too harsh for them to fully unpack, so the couple is content for the time being to leave the house in this partially occupied state. When a friend informs them that George's professorship at the university might be threatened by the rebound of his academic and onetime romantic rival Eilert, everyone's insecurities bubble up to the surface. Skeptical of Eilert's transformation, Hedda suddenly becomes desperate to re-ignite his once notorious courage to live. Pulled down a path of deception, Hedda faces her desire for a life lived beautifully and without compromise- whatever the cost.