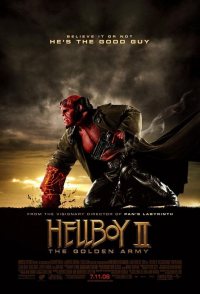 After saving the world from the evil Russian mystic, Grigory Rasputin, in Hellboy (2004), the red-skinned gun-toting demon and humankind's strange protector, Hellboy, now struggles to accept that the operations of the Bureau for Paranormal Research and Defence must remain secret. As if that weren't enough, the powerful Elven-prince, Nuada, is bent on retrieving the fragments of a crown that commands the indestructible Golden Army: an omnipotent legion of clockwork warriors that can destroy all humans. Now, before this new menace, all hope rests on Hellboy and Liz's old brothers-in-arms, as well as the ectoplasmic being, Johann Krauss. However, the Earth's supernatural defenders seem to be no match for Nuada's unstoppable forces. Did Hellboy and the rest bite off more than they could chew?