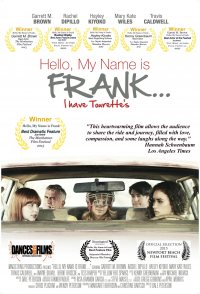 Comedy about Frank, a hermit with Tourette Syndrome who is thrust into the harsh realities of the world when his caregiver dies. After recognizing that Frank is despondent, the caregiver's teenage daughter, Laura, drags a reluctant Frank along on a life-changing road trip with Laura and her friends. 'Hello, My Name is Frank...' is a modern-day Wizard of Oz meets Little Miss Sunshine - a road trip taken by Frank and his companions that causes them all to grow, bond and come into their own.