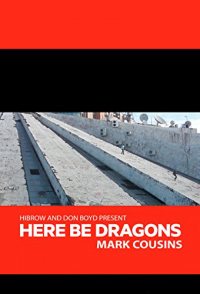 Filmmaker Mark Cousins goes to Albania for five days, and films what he sees. He discovers that the movie prints in the country's film archive are decaying. In investigating this, Cousins begins to encounter bigger questions about the history and memory of a place. Perhaps a country whose 20th Century, dominated by its authoritarian ruler Enver Hoxha, was so traumatic, should allow its film heritage to fade away? Perhaps a national forgetting should be welcomed? Influenced by the films of Chris Marker, Cousins' film broadens to consider the architecture of dictators and the great icon paintings of Onufri. In the past, when cartographers knew little about a country, they wrote on it Here be Dragons. Albania was, for decades, one of the least well know countries in the world. Cousins' road movie meditation takes the advice of Goethe: "If you would understand the poet, you must go to the poet's land."