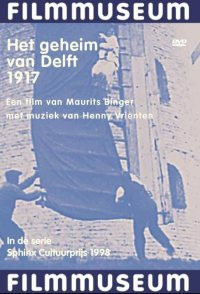 The secret from the title is the lost recipe for shiny Delft pottery, that Jan Vogel is desperately trying to rediscover. For his attempts he needs platinum, but the funds run out because the factory owner Van Haaften has lost his money in stock-speculations. Luckily for Jan, he finds a farewell letter in the park, including a large sum of money. Meanwhile, the owner's son Leo confesses his love for Jan's daughter Annie, but Van Haaften forbids their marriage. Because of Jan's nephew Willem Berg's ongoing spying attempts to gain knowledge of the secret recipe, Jan buys Van Haaften a gun to defend himself against the villain. One night, as Willem has secretly entered the factory, Van Haaften enters his office to find a letter from a friend with a sum of money, that is not nearly large enough to cover his losses. He writes a suicide note and shoots himself, after which Willem enters the office and steals the money and the note. When, on the following morning, Jan has finally succeeded ...