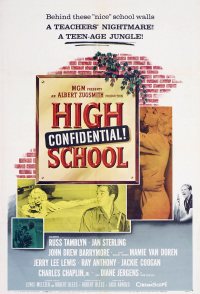 A tough kid comes to a new high school and begins muscling his way into the drug scene. As he moves his way up the ladder, a schoolteacher tries to reform him, his aunt tries to seduce him, and the "weedheads" are eager to use his newly found enterprise, but he has his own agenda. After an altercation involving fast cars, hidden drugs, and police, he's accepted by the drug kingpin and is off into the big leagues. A typical morality play of the era, filled with a naive view of drugs, nihilistic beat poetry, and some incredible '50s slang.