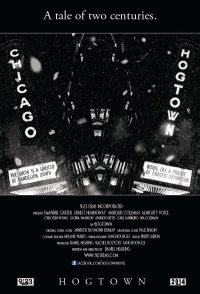 HOGTOWN is a feature-length, black and white, dramatic feature from writer-director Daniel Nearing. HOGTOWN is nearly 20 years in the making, and is the second film in a trilogy and grows organically out of CHICAGO HEIGHTS, which was based on WINESBURG, OHIO, an 'unadaptable' seminal American novel. The film was named to Roger Ebert's last list of Best Art Films in 2010. The film is set circa 1919 in Chicago and begins with the disappearance of a millionaire theatre owner in a snowstorm. Its climactic sequences play out against the backdrop of the horrific race riots of that summer. The film is ostensibly about a murder investigation, but HOGTOWN is much more an exploration of this most American of American cities, looking into the intimate lives of many of its people. This 'period-less piece' is shot in undisguised contemporary Chicago, suggesting that the issues of its era resonate through the present. Herman Wilkins makes his feature debut as a leading actor in HOGTOWN, playing not...