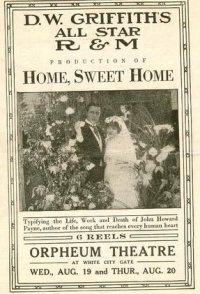 Over the protests of his mother and sweetheart, writer John Howard Payne leaves home seeking adventure. In England, he becomes involved with The Worldly Woman who rebukes him after he returns penniless from debtors' prison. He travels to France and then Tunis, where he dies, leaving only the song "Home, Sweet Home" as his legacy. In another story, Apple Pie Mary, a cook in a mining camp, loves a young man who goes East to marry a wealthy woman. He hears the song, however, and returns to Mary. The next story concerns a widow with three sons. When one son kills another over money, the grief-stricken widow wants to commit suicide, but she hears the song and decides to live for the sake of her third son. The final story involves a young wife who plans to leave her older husband for a younger man. As she hears the melody played by a violinist in another apartment, she decides to stay with her husband and the two raise a family. Finally, Payne is seen in a pit, imprisoned by Lust and Greed....