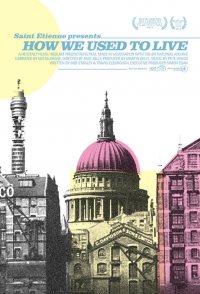 Using only colour footage from 1950 - 1980 How We Used to Live covers the early days of the welfare state up to the opening years of Margaret Thatcher's reign. From the shadow of the war and the great future created by the welfare state to the rise of individualism and the triumph of the consumer society, it is as much a lyrical cinematic meditation on life now as then. The soundtrack is written by Saint Etienne's Pete Wiggs with vocalist Sarah Cracknell providing Swingle-y harmonies. While the script is by the band's Bob Stanley in collaboration with the author Travis Elborough. This is brought to life through the distinctive voice of Deadwood star Ian McShane. Mixing history with fantasy, the viewer is led back through time by McShane's fictional narrator whose only constant is London. It is a city that he fell hopelessly in love with as child in the provinces and his digressive personal reminisces provide a universal account of the period, its hopes and ambitions and its fears and ...