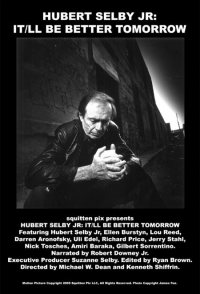 An exploration into the life and art of the renowned author of "Last Exit To Brooklyn" and "Requiem For A Dream." Hubert Selby Jr., a self-described "scream looking for a mouth," against all odds, reached international acclaim with his controversial novels. His is a classic story of the great American novelist, overcoming tuberculosis, drug addiction and financial ruin, Selby eventually triumphed in his life and penned seven of the most remarkable and distinctly American books ever written.