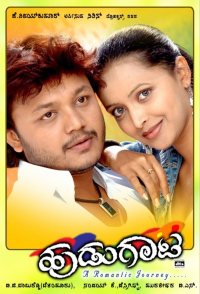 The story begins with Balu (Ganesh) who is a correspondent of 'Satyavahini' newspaper and is on his way to Kanyakumari as part of a punishment to cover a sports assignment. Keen to unravel scandals and spicy news, Balu comes across a girl clad in Burkha and true to his guesses, he learns that it is Priya (Rekha), the daughter of a famous business tycoon who is on the run from her father to get to her fiancé Rahul, a prominent badminton player. Apparently, Priya's father is against Rahul as he is aware that the player is a big flirt. Both of them miss their bus and Ganesh promises to take Priya to Rahul with whatever money he has got. Meanwhile, he keeps recording the whole story which will be ready for headlines next day. As time passes, both of them get to know each other and gradually fall in love with one another without realizing. However, Balu wants to stay away from all this and calls up Priya's father to return back his daughter. He also asks for the expenses he bore on his ...