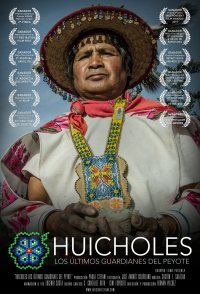 The urgent story of the mystical Wixarika People, the Huicholes: one of the last pre-Hispanic alive cultures in Latin America. Their struggle against the Mexican government and multinational mining corporations to preserve Wirikuta, their most sacred territory and home of the famous peyote cactus. The mining activities of the Canadian companies that got the concessions in 2010 to prospect this protected area, rich in silver, gold and other minerals, are seen by the Wixarika and their supporters as a great menace for the delicate biodiversity of this unique ecosystem, listed by the UNESCO as World Cultural and Natural Heritage. An unequal and controversial fight from today that triggers the global debate between ancient cultural values, the exploitation of nature and the inevitable development of the peoples.