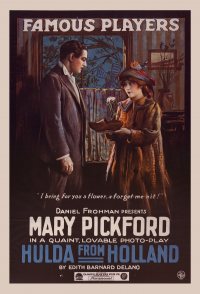 Tragedy strikes Uncle Peter on his way to pick up his niece Hulda, who has just arrived in the United States from Holland, he is hit by a car and must be hospitalized. As a result, Hulda takes a room in a boarding-house, where she falls in love with Allan, the artist son of John Walton, a railroad magnate who has been badgering Peter to sell him his land. Peter eventually recovers and Hulda goes to live with him, but Allan follows her and, at his father's request, keeps on suggesting that Peter sell his land to the railroad. Peter finally relents, after which Hulda and Allan get married. John attends the ceremony, and after the couple is married, there is a reconciliation between him and Peter.

Different from the Others
Total votes: 1,103
Average rating: 7.0