In Search of the Castaways ratings (Movie, 1914) 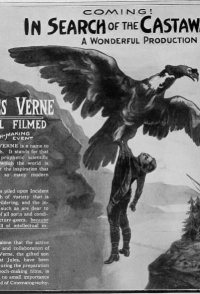 As Lord Glenarvan and his wife, Lady Helena, are cruising in their yacht, "Duncan," off the coast of their native land, Scotland, the crew harpoons an immense whale which discloses when it is disemboweled a bottle with a message referring to Captain Grant, who had set out in quest of land to colonize and who had lost his ship, the "Britannia," in latitude 37 degrees off the coast of South America. The interpretation of the message is rather uncertain, as the writing had been nearly obliterated. An advertisement in a daily newspaper to the effect that data concerning Captain Grant has been found brings Robert and Mary Grant, children of the shipwrecked mariner, to the residence of the lord to entreat him and his wife to sail for Patagonia to see if their father cannot be found. Lord Glenarvan assents, and, when on the ocean a few days, a stranger, who had mistaken the "Duncan" for the good ship "Scotia," upon which he was to sail to India, makes himself the laughing stock of the crew ...

Fantômas: In the Shadow of the Guillotine
Total votes: 1,957
Average rating: 7.0