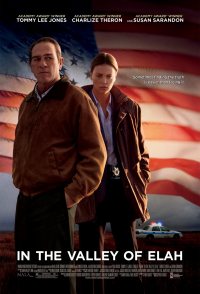 In Monroe, Tennessee, Hank Deerfield, an aging warrior, gets a call that his son, just back from 18 months' fighting in Iraq, is missing from his base. Hank drives to Fort Rudd, New Mexico, to search. Within a day, the charred and dismembered body of his son is found on the outskirts of town. Deerfield pushes himself into the investigation, marked by jurisdictional antagonism between the Army and local police. Working mostly with a new detective, Emily Sanders, Hank seems to close in on what happened. Major smuggling? A drug deal gone awry? Credit card slips, some photographs, and video clips from Iraq may hold the key. If Hank gets to the truth, what will it tell him?