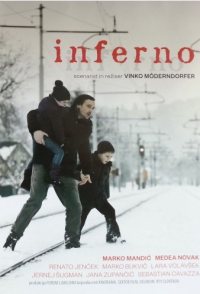 The film focuses on a young unemployed working class family and their everyday struggle for survival. The family is like any ordinary European family, trying to make a living with the work of their hands. Due to the global economic crisis their life ends up in a blind alley. Everything looks as if there is no way out. That individuals cannot fight against injustice, misery, the unseen authority of the capital... However... Granite cubes, torn out of streets, are waiting... Have waited... For centuries. Iferno exists. But only temporarily.