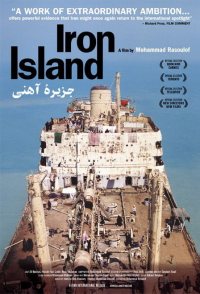 Some poor people in the Southern coasts of Iran do not have any place to live, and thus, they reside on an old, abandoned ship in the sea. Captain Nemat, their chief, tries to persuade the ship-owner and the official authorities not to get the ship back. On the other hand, he is selling the iron parts of the ship piece by piece. 'Iron Island' is the story of those whose ignorance makes them simply trust those who are always ready to abuse their trust.