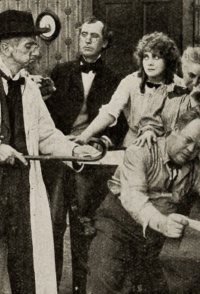 Hi Judd, poet, postmaster and philosopher, is the sunshine of the village, a veritable doctor of happiness. His right arm the little world of the village leans on, the kind words he scatters broadcast reap their harvest of love for the old postmaster and the verses he writes (sometimes when he should be working) proclaims him the wit of the village. And because of the verse writing Mrs. Judd is often discouraged. Hi confides in his daughter, Bess, that he often stands in awe of Mrs. Judd when she catches him pencil in hand, with the woodpile untouched and the chores not done. But Bess is consoling and when Hi is not around she makes a collection of the verses and sends them on to a great newspaper. Theirs is a peaceful life that must have its dramatic climax and it all descends upon them at once. Jim Skinner, an unscrupulous, grasping old miser, holds the mortgage on the house and also has designs upon Hi's position as postmaster. Then the bank fails and shadows hang low. In the ...