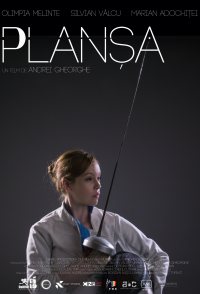 The directorial debut of Andrei Gheorghe tells the delicate love story between Anda and Alex, two young people with a passion for fencing. Alex is thrown out of the game by a serious knee injury and he has the chance to re-enter the fencing world as a coach in Constanta. Anda moves to Constanta for her studies and because her boyfriend, Mircea, lives there. Like Anda and Alex, Mircea is also a fencer. Due to their common passion for sport, Alex and Anda develop a relationship witch crosses the professional barriers. As the connection between the two of them becomes more and more intense, tensions occur in the relationship between Anda and Mircea, because of Mircea's jealousy. The tension keeps growing until Anda is facing a new situation: She either continues the relationship with Mircea, who doesn't believe in her vocation, or follows her dream and a possible relationship with Alex, this introverted kind of man, who lives on a boat, because he doesn't want any strings attached.