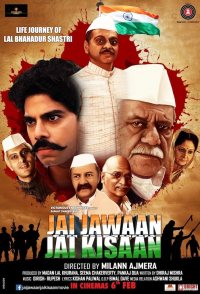 Jai Jawaan Jai Kisaan is a journey about Lal Bahadur Shashtri's glorious life. The movie begins with the various freedom fights in the country during the pre-independence era. A time where two groups ( Garam Dal and Naram Dal) had waged a war against Britishers with different set of ideologies. It was under the leadership of Gandhi ji that Naram Dal took on the Britishers and led a peaceful march towards independence. Lal Bahadur Shastri was a prominent personality in this group and has a huge role to play in the history of India's independence. However this dynamic leader had his own story to deal with during the initial phase of his life. A low economic background, untimely death of his father and a mother to look after...these were just some of the problems that gave Lal Bahadur Shashtri a direction in life. After completing his studies in Banaras, Shashtri ji came to Allahabad and that's when he witnessed a revolution in the country. Inspired to take part in the freedom fight, Lal...