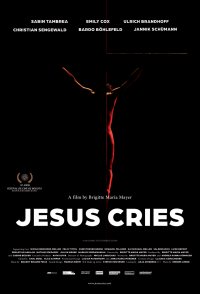 JESUS CRIES is a modern adaptation of the New Testament. The story is set in a fictitious metropolis in the near future. The First and Third Worlds are reflected in one city. The divide between poor and wealthy continually grows. As insurrection begins, Jesus of Nazareth becomes the political and spiritual force behind change. He is arrested, tortured, and executed. After his death, his disciples are thrown into confusion with feelings of doubt and guilt. They fight over the interpretation of his teachings and their responsibility to his vision. Will they themselves move to action?