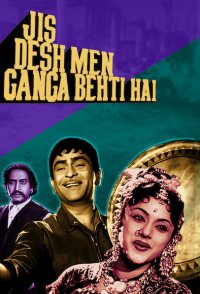 Orphaned Raju lives in Central India and makes his living singing songs. One day he comes to the assistance of an injured man and before he knows it, he is abducted and held by a band of bandits who believe that he is an undercover policeman. The man he assisted is none other than Sardar, the bandit leader, who treats him like a honored guest and eventually his daughter Kammo and Raju fall in love with each other. Kammo convinces Raju that they are socialists and are just making sure that wealth is equally distributed in the society. Then Raju is asked to accompany the bandits to a wedding feast where he witnesses a child and the wedded couple getting killed. Having seen enough, he goes to the police, who decide to confront and kill the bandits. Unable to see their deaths, Raju goes to warn the bandits but is shunned. Than a militant bandit named Raka kills the Sardar, takes over the bandits and decides to forcibly marry Kammo. The question is what can Raju do under these ...