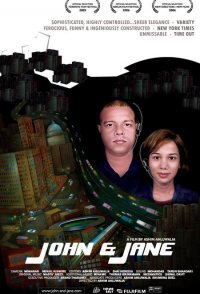 An entirely original blend of observational documentary and tropical science-fiction, John and Jane follows the stories of six call agents that answer American 1-800 numbers at a Mumbai call center. After a heavy mix of American 'culture training' and 14-hour night shifts, the job starts to take its toll. Counterpointing the fluorescent interiors of late night offices and hyper-malls with the uneasy currents swirling around the characters, John and Jane finds a young generation of urban Indians that live between the Real and the Virtual. However this futuristic world of American aliases and simulated reality is not science fiction, these are the times in which we live. John and Jane raises disturbing questions about the nature of personal identity and what it means to be human in a 21st century globalized world.