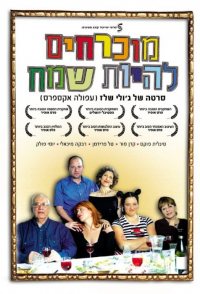 Joy Levine lives in an old apartment that, in complete contrast to her, is shabby and worn-out on the outside while well-kept and filled with joy on the inside. Her life changes when she auditions for a TV show called "Gotta Be Happy". To her astonishment, she is chosen, and her mission is to throw a surprise party for her parents on the upcoming show. However, there is a price to pay for all this: she has to let the viewers into her private inner world and share with them an event that has been overshadowing her family's life and hers for the past 22 years; an event that made a tight-knit bunch of friends shun her parents, Chaya and Yitzhak Levine. The show is to be aired right after Yom Kippur, and the theme is forgiveness. Joy must get all her parents' friends to the party in order to conduct the reconciliation. However, reality keeps obstructing her efforts. The idyll expected from such a show is jeopardized by a string of events that threaten to shatter the already fractured ...