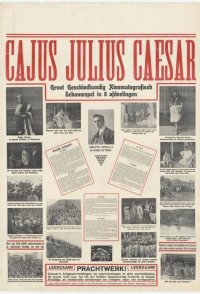 Before reaching his twentieth birthday, Caesar meets and falls madly in love with pretty Cornelia, daughter of Lucius Cinna. They are soon married despite the advice of their friends, who well know the bitter animosity existing between Sulla, dictator of Rome, and Lucius Cinna. The immediate result of this hasty marriage is an annulment and the banishment from Rome of Caesar. He leaves, vowing that the eternal city shall again hear of him. This does not occur until twenty years later, when he returns at news of Sulla's death and plunges briskly into the campaign for the consulship. In this he is aided by Calpurnia, daughter of the wealthy Piso. Caesar and Calpurnia are married and Caesar is elected to the consulship in the face of strong opposition by Cato, the younger, who fears the growing popularity of the still youthful statesman. To further fortify himself against the attacks of Cato, Caesar forms a political alliance with Pompey. which later grows into the first triumvirate ...