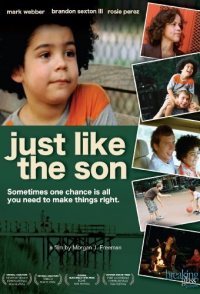 "Just Like the Son" chronicles twenty year-old Daniel Carter's (Webber) attempt to help an eight year-old, Boone (Ortiz), find a better life. Daniel First meets Boone while doing community service at an East Village grade school. The boys strike up a friendship during which Daniel learns that Boone's mother is sick and may be hospitalized. He also learns that Boone has an older sister, Charlotte, who lives in Dallas. When Boone does not show up for school a few days later, Daniel begins to ask questions and learns that Boone was placed into a temporary foster care in Upstate New York. After being turned down as an adoption candidate, and failing to convince his Father to help him gain custody, Daniel decides to rescue Boone from the orphanage. He puts all his street smarts to use and they head to Dallas. While the goal is to locate Boone's sister, the heart of the story is the unexpected bond Daniel and Boone form throughout their road trip adventure.