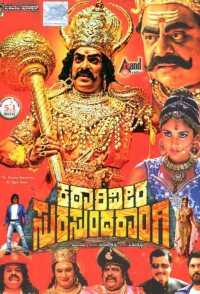 The film is a sequel to Upendra's earlier movie Rakta Kanneeru which was released in 2003. Upendra (Upendra), is a wannabe don who dies in a gang war. When he reaches the doors of Heaven and Hell, he decides to go to hell as he feels heaven's beautiful look and silence makes it too boring. He soon meets Yama (Ambarish) who is unable to decide whether to put him in hell or heaven as he has not done any sin nor any good deed. In the midst of this, Upendra finds his father, Mohan (also Upendra) and also falls in love with Indraja (Ramya), the daughter of Indra. After her initial rejection, He manages to get her to reciprocate as well. But Indra, refusing to let his daughter marry a human, challenges Upendra that he has to go to earth for 10 days with Indraja and will forget that he ever died once he reaches there. In these 10 days, if Upendra does a sin, then he will have to forget Indraja. Upendra and Indraja accept the challenge and go to earth with Yama and Chitragupta (Doddanna). ...