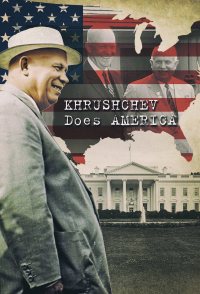 In 1959, at the height of the Cold War, Soviet Premier Nikita Khrushchev embarked on a two-week public relations tour across the US. Americans emerged from fancy new bomb shelters for a glimpse of a Communist dictator visiting their landmarks and experiencing local hospitality. Greeted by angry mobs and celebrity gawkers, Khrushchev turned on his charm and quick wit. By the time he hit the West Coast, the US was enthralled by his presence, chasing him along the whistle-stops of his tour. As current East-West relations become strained, this is a timely reflection on super power maneuvering. Every moment of this fleeting love affair was recorded and preserved from both Soviet and American perspectives, creating a treasure of visual material ripe for revision. Playing with didactic documentary form, Tim Toidze weaves the humour, hysteria and surreal qualities of this state visit into a profile of the political propaganda that permeated both sides of the Iron Curtain.