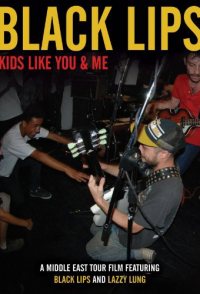 In 2009, The Black Lips started investigating the possibility of a bridge building tour of the Middle East with stops throughout the region. After two years of planning, several uprisings, a civil war the tour finally came to fruition in the fall of 2012. It wasn't easy either. Promoters in Jordan and Alexandria, Egypt backed out at the last minute because the band had played shows in Israel and a show in Erbil, Iraq had to be changed when an explicit video of the band was viewed by a government official. It all worked out in the end though and the shows in Alexandria and Erbil turned out to be highlights of the tour. Kids Like You and Me: A Middle East Tour Film documents this journey through one of the most exciting regions in the world including three groundbreaking stops in Egypt. (The last known American rock band to play Egypt being The Grateful Dead in 1978!) Get on the bus with The Black Lips and their good friends, Lebanese indie rockers, Lazzy Lung. See the people of the ...

Where to Invade Next
Total votes: 23,225
Average rating: 7.5
Switch to mobile version