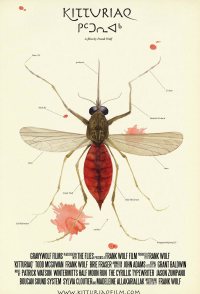 In the summer of 2012, Frank Wolf and Todd McGowan completed a 620 km journey by canoe from Nain, NL to Kangiqsualujjuaq, QC via a new route over the vast tundra of the Labrador Plateau. The resulting film- Kitturiaq- intimately portrays this little-known region of the north. A local mosquito named Malina tags along and narrates the film as the quirky pair journey through a remote, beautiful, and harsh landscape. With good humor and a dash of performance art, they endure a myriad of whitewater rapids, mountain portages, and clouds of mosquitoes and black flies. Much more than an adventure film, Kitturiaq (which means mosquito in Inuktitut) shares the perspectives of the Inuit and Innu people who have called this land home for thousands of years as they face the challenge of balancing their traditional ways with the demands of the modern world. Set to the music of noted artists like Montreal's Patrick Watson and Vancouver's Wintermitts, Kitturiaq will touch the wild soul of audiences ...