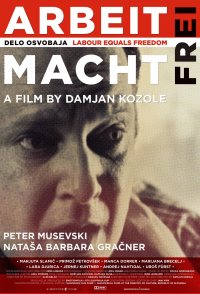 Peter is in his early forties and until recently he worked in a factory, but after Slovenia's integration into the European Union, the factory closed down and Peter and his colleagues have been made redundant. Slowly but surely, he is losing self-confidence and self-esteem. His wife Vera is actually seeing another man and their marriage soon falls apart. Almost overnight Peter remains alone, as Vera moves out and takes Sonja, their daughter, with her. In a moment of despair, Peter decides to hang himself. He takes a rope and when the rope is tightening around his neck a doorbell rings. By mere coincidence a neighbor, who just wanted to borrow some coffee, saves his life. One day, on his way home, he finds all his neighbors, scared and worried, in front of the house. He learns that gas has been leaking in the cellar. Fire fighters should have arrived already, but they got stuck in a traffic jam. Peter does not hesitate; he runs into the building and manages to shut down the main valve ...