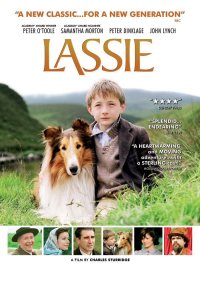 Life is hard for Yorkshire miner's son Joe Carraclough (Jonathan Mason), who is beaten at school by a his teacher, his only consolation is his collie Lassie. It gets worse: when the mine is decommissioned, his father, Sam (John Lynch), is forced to sell the dog to The Duke (Peter O'Toole), who owns the local estate. The Duke's servant, Hynes (Steve Pemberton), scares the dog, who keeps running back, so the Carracloughs have to keep returning her, until the Duke moves to the Scottish Highlands for the holiday season. Lassie escapes, embarking on a desperate journey home, with daunting Glasgow dogcatchers and taken in by a circus performer. It looks like a miracle is needed, by Christmas.