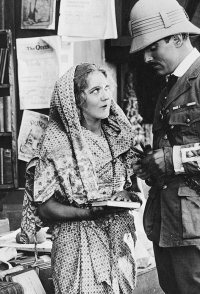 Young Hindu woman Radha, becomes best friends with Captain Raymond Townsend during his service in India, but he soon goes back to England to tend to the estate of an uncle who has just died. Then, Ramlan, the sword maker who raised Radha, is arrested for taking part in an anti-British uprising, and before he goes to jail, he decides to tell Radha the story of her birth, her real father, Captain Brooke, died of a drug overdose, and her destitute mother then entrusted her to Ramlan. After learning about her background, Radha goes to England to claim her rightful inheritance from the estate of her late grandfather, who is also Raymond's uncle. Raymond is delighted to discover that his Hindu friend is really a white woman, and after dividing the estate with Radha, he brings the fortune back together by marrying her.

Different from the Others
Total votes: 1,118
Average rating: 7.0