Lick an Apple Like a Pussy: The Movie Stanislawski Never Made ratings (Movie, 2002) 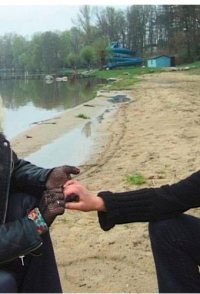 As you can see from the title, this underground movie (but "how underground can you be" as the main protagonist interestingly remarks) is neither a sex/erotic/porn movie, nor an intellectual Stanislawskian exercise of style: it's both. Or, to phrase it more precisely, a intellectual-existential wank about sex and life - or rather failure in life. An emotionally broken Polish director - the excellent Malga Kubiak, herself an actor-director of sexually graphic movies in real life - gathers a bunch of German wannabe actors in a remote bungalow deep in the forest. The obsessive director, an increasingly tyrannical psycho-maniac, wants total commitment from her actors to her movie, i.e., wants them to have real sex before the camera. She chose German actors because she thought Germans didn't have any problem with nudity. But the cast rebels. They don't mind playing sex, but don't want to do it for real on camera. The director - whose suggestive forlorn beauty is that of a retired porn star...