Living Luminaries: On the Serious Business of Happiness ratings (Movie, 2007) 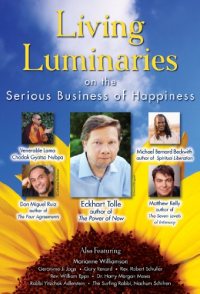 Happiness. If you turn on the news today you don't see much of it. In the wake of natural disasters, terrorist attacks and government let-downs, Americans are striving for a light at the end of the tunnel; a glimmer of hope that will bring solace and peace back into their lives. We were given life, liberty and the pursuit of happiness. But what is happiness and how is it achieved? With life in these times, it is hard not to focus on the negative. However, people by nature want to stay positive. People are hungry for improvement in all aspects of their lives, with the pursuit of happiness leading the way. 100 million "Cultural Creatives" are on a mission to improve their lives and the lives of others. They are ultimately on a quest for true happiness. Our film "The Serious Business of Happiness" embodies this very idea. This "docu-drama" brings us along on a journey in the search of absolute contentment. This film allows our audience to meet the internationally revered "Luminaries" ...