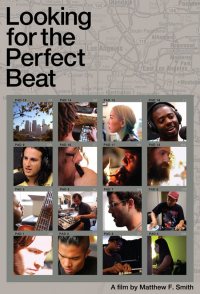 'Looking for the Perfect Beat' is a cinéma vérité immersion inside the unique Los Angeles "beat scene" music community, centered around the world famous Low End Theory club night. Filmed over the Summer of 2013, we are given the opportunity to elegantly lift the veil on the personal creative processes of the internationally-acclaimed pillars of the scene. Indie music luminaries such as Thundercat, the Gaslamp Killer, TOKiMONSTA, Jonwayne, Baths, Daedelus, Ras G, Teebs, D-Styles, edIT of the Glitch Mob, Astronautica, Free the Robots, and Matthewdavid are all featured in vivid detail. The soundtrack for the film creates itself live on camera as the film elapses. This avant-garde visual angle on each subject in their respective creative spaces provides for an introspective glimpse into what would otherwise be unseen. Told as a 24-hour tour throughout the city, the fly-on-the-wall perspective of 'Looking for the Perfect Beat' archives each artist's studio at this moment in history, ...