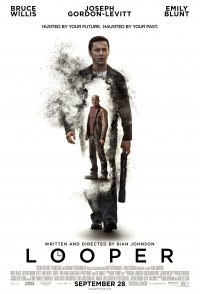 Joe is classified as a "looper", a job in which his employers use time travel to send men from the future to be killed into the past, where Joe can properly dispose of their bodies. However, to tie up loose ends and erase the evidence of his ever being a looper, Joe knows that one day his future self will be sent back for him to kill. When this day comes, Joe's future self is prepared and escapes, and the two men struggle separately in the past trying to evade capture and attempting to fulfill their own personal agendas.