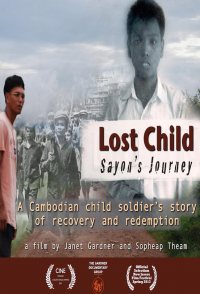 LOST CHILD ~ SAYON'S JOURNEY shows how one Khmer Rouge child soldier confronts his childhood experiences during Cambodia's darkest hour, what he witnessed, and struggled with as he came of age. Sayon Soeun was abducted at the age of six, exploited by the Khmer Rouge, his family life and education stolen. His recovery and redemption from unimaginable evil entails his transition from an orphanage in a refugee camp to adoption by a loving American family. After more than 35 years, he recently made contact with brothers and a sister he assumed were dead. The documentary follows his journey back to Cambodia to heal himself by finding the family that let him slip away and forgiving himself for his complicity as a Khmer Rouge child soldier.