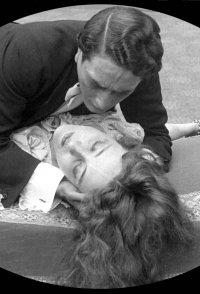 Leslie Swayne, an adventurer, in order to obtain enough money to satisfy the needs of his extravagant life, has been bribed to steal the plans of the fortification from the staff officers of the Grand Duchy of Wallenstein. This undertaking, which at one time would have seemed difficult to him, becomes very easy, due to the friendship between himself and Colonel Julius Holbein, chief of the staff, and father of Elsa, for whom Swayne has shown a great deal of friendship, and in return he has Elsa's sincere love. After a dinner held at the Colonel's, during which the villain Swayne whispered sweet words of love into Elsa's ear, he succeeds in stealing the desired documents, and, protected by the darkness of the night, he escapes. Overcome by the sad reality, the Colonel is in a desperate state of mind. Elsa tries to efface from her mind her terrible suspicions, but in going to the hotel she learns of the sudden departure of Swayne, and her suspicions are confirmed. Colonel Holbein, to ...

Fantômas: In the Shadow of the Guillotine
Total votes: 1,923
Average rating: 7.0