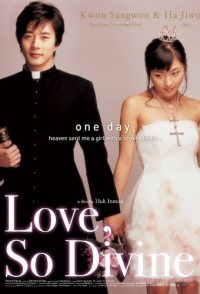 Kyu-sik is a seminary student, who one day falls during a church service, dropping a precious, pope-blessed relic. As punishment, he and his comic relief friend Seon-dal are sent away to a small church in rural Korea to work in a sort of 'priest limbo' until they get their act together. Upon his arrival, Kyu-sik ends up in an awkward position with a groggy Bong-hee, a pretty girl who just flew in from America to visit her uncle-the priest of the rural church. However, Bong-hee's true reason for coming is to see her beloved boyfriend, but things don't go terribly smoothly and she is stuck in the church without a way home. Of course, all while she and Kyu-sik are slowly testing each other's nerves. Hate soon amounts to affection and the film gradually moves from playfully mean situations to the cute fuzzy ones banking on Kwon Sang-woo's and Ha Ji-won's endearing chemistry.