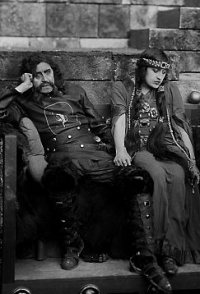 Although the exact sequence of events in this film are vague, the story, according to news items, closely follows Shakespeare's play. In the film, Lord Macbeth encounters three witches who predict that he will be the King of Scotland. When King Duncan visits Macbeth's castle, Lady Macbeth convinces her husband to kill the king. Plagued by guilt, and fearing that the other prediction of the witches--that Banquo will beget kings--will come true, Macbeth kills Banquo. Eventually Lady Macbeth kills herself and Macbeth is killed by Macduff.