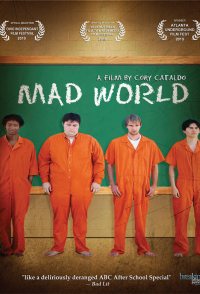 Will is a misfit who can't catch a break: he's terrorized by his psychotic father at home and taunted by his peers at school. His only solace comes from three classmates who face similar abuse. Without guidance or a sense of purpose, the four friends spend their days getting high and commiserating until they reach a breaking point. With nothing to lose and no escape from the onslaught of ridicule, they decide to unleash their mean streaks in a whirlwind of pranks, partying and -ultimately - destruction. A delirious black comedy, Mad World is a nightmarish, drugged-out vision of growing up in conservative America. Cory Cataldo's directorial debut takes audiences to shocking depths in order to make a bold statement about living in a society where those with the least amount of sanity seem to hold the most power.