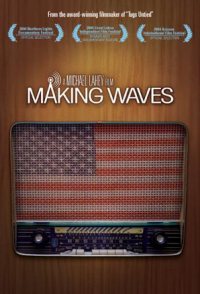 What do a public access TV personality, an electronics engineer, a Vietnam vet, a libertarian congressional candidate and a retired millionaire have in common? They're all operating unlicensed, 'pirate' radio stations in Tucson, Arizona. Making Waves follows their uphill struggle to be heard on our publicly-owned but corporate-controlled airwaves. Armed with low-cost micro-radio equipment, the First Amendment, even a how-to video by a Michigan pastor, the Tucson pirates use unlicensed radio as a form of civil disobedience. For their stations, this means everything from providing the real alternative to alternative music to educating the public about its Constitutional rights. Making Waves reveals the pirates' personal and political passions that compel them to defy the U.S. Government.