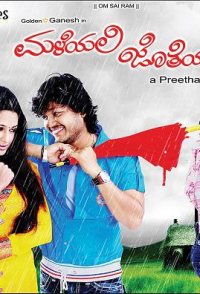 Preetham is the only son of a wealthy but superstitious real estate dealer (Rangayana Raghu). His close friend is Venkatesh. After Preetham passes his P.U.C, his father's astrologers informs that for the continued peace of his household, Preetham must find a wife. To avoid the problem, Preetham and Venkatesh bribe an astrologer to lie to Preetham's father of a very eligible girl in Sakaleshpura. Thus Preetham is able to escape to Sakleshpura where he stays with an army colonel named Thammiah. It is here that he bumps into Anjali who lives in the district nearby, and also into Sandhya, who is an independent girl and a man hater. Preetham also begins to receive many calls from Lucky, a little girl who dialed his number by mistake and became his "mobile friend". Preetham falls for Sandhya. Slowly he becomes friends with Anjali and in order to score brownie points with Sandhya, invents a story of Anjali being dumped by her childhood lover and being in a state of depression. Sandhya ...