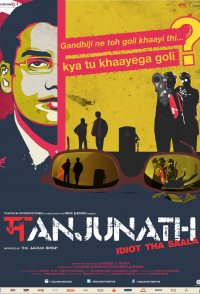 Manjunath is a true, inspirational and hard hitting story of an ordinary man and his fight against corruption. After passing out from the prestigious Indian Institute of Management, Lucknow, Manjunath Shanmugam was placed with an Oil company as a sales manager only to blow open the large scale adulteration of fuel taking place in the country. It was then that this courageous and honest man was brutally murdered while trying to do his job in the right way and became the victim of this very system which he was trying to protect.