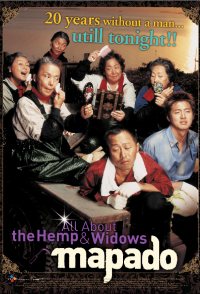 Trying to track down a young woman who stole a winning lottery ticket worth $16 million from them, gangster Jae-cheol and corrupt cop Chung-su follow her to the small island of Mapado... But once they arrive on Mapado Island Mapa island, the two men get far more than they bargained for. The island is so tiny and isolated that no one lives there except five old women - odd but friendly who have not seen any men ->a man in 20 years. Jae-cheol and Chung-su feel like they've been sold at a cattle market, as their hunt for the woman who stole their lottery ticket turns into a nightmare of slave labor and sexual harassment by the grandmothers. But with a full week until the next boat comes to this isolated island, what can they do? Will they be able to find their money without losing their minds?